You are here: GeekSays Technology News » Smartwatch News » Moto News » Is this the first image with the next Moto 360?

It’s been a while since Motorola’s first smartwatch, the Moto 360, was launched, so we expect to hear something about its successor any time now. After all, all its main competitors just launched new models, while others are working hard at theirs, in order to be able to compete with what seems to be the device with the biggest potential: Apple Watch.

Motorola is up to something

For a long time, the Moto 360 was considered to be the best smartwatch on the market, so the Lenovo-owned company definitely has all the resources needed to come with another great model, but how long until this will happen? 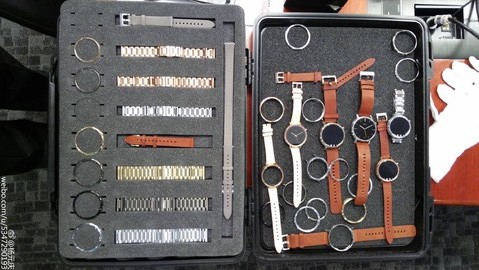 Well, speaking about Lenovo, it seems that the company’s CEO, Yang Yuanqing, just revealed what we should expect from the next Moto 360 in terms of design. Accidentaly or not, he posted an image on his Weibo page, showing some kind of brieface with a couple of smartwatches, according to Phone Arena. Oh, and it was quickly removed, obviously.

The main differences we can spot are the lugs for the straps. Also, besides coming with a different mechanism of attaching them, these straps will be available in different materials, like leather, metal and more. Oh, and are some of them made out of gold?

Get rid of that thing!

If everything seems pretty nice until now, that one big minus which is constantly bugging us, is still there. We’re talking about that black stripe on the bottom of the Moto 360, which looks like it’s going to be kept. Still, we hope that these are just prototypes and the finally version won’t feature it.

For the moment, these are the only details we have about this presumed new Moto 360 smartwatch and if it’s not just a teaser, posted in order to make some buzz, the we will definitely hear more about the new wearable soon!