We’re pretty sure that almost every tech enthusiast knows MKBHD’s video with the iPhone 6 display, where he puts the iPhone 6 sapphire crystal display piece through each possible scenario: key scratching, knife scratching and even bending it to the max. The result? That thing seemed indestructible. And apparently, people don’t like using a screen protector that much, so this would make out of the iPhone 6 an almost perfect phone. 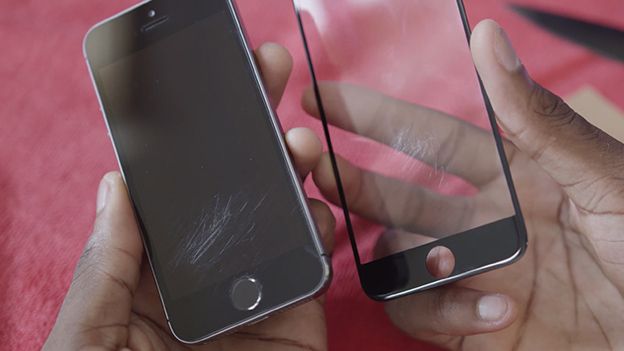 Still, the YouTuber wanted to demonstrate that the display is not actually indestructible, so he made a sandpaper test, scratching both the rumored sapphire crystal display and the iPhone 5S’ Gorilla Glass 3 display. This time, he made a little mess…

Like expected, both displays got scratch marks on it, but the one which will be used on the iPhone 6 turned out to be more resistant. The interesting part is that the iPhone 5S’ home button, which incorporates the TouchID sensor, made it though the test without any damage, meaning that it’s made from a purer piece of sapphire crystal.

Purer? And what’s the display going to be made of?

Ok, but what about the 4.7″ display? Well, that one is actually a compound, that’s why the screen even bends a little. And of course, it’s less expensive. It’s true, Apple does make premium devices, but making a display from the same material as the home button on the 5S would make it too expensive.

Take a look at the video and see the whole test: