You are here: GeekSays Technology News » Apple » iPhone News » Is the iPhone 6 going to be a Big Phablet?

This time, new photos got leaked showing exactly what the next iPhone will be like: A Giant Phablet.

I don’t know about you but this is the next big thing, guys. This is what a lot of iPhone users have been waiting for.

It’s rumored that Apple will release two versions of the long awaited iPhone 6 to satisfy all of its customers.

This seems like good news, but we are afraid from the price tag Apple is going to set for the new iPhone. 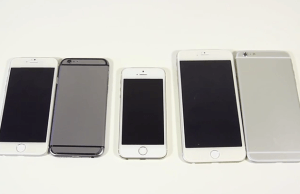 From the image above, we can see a scary phablet on the right, threatening the other small iPhones maybe?

Is it possible that the winner will be an ungainly hybrid that no one took especially seriously when it arrived on the scene just three years ago? The phablet — half-phone, half-tablet — is threatening to do just that, outgrowing everything else at the moment. If it keeps up as many forecasters believe it will, the phablet will become the one device to rule them all, crushing the smartphone, tablet and much of the PC market along the way.

Apple showed it wasn’t entirely resistant to change later that year, though, when it launched the iPad Mini, a 7.85-inch tablet. Steve Jobs had famously mocked 7-inch tablets, yet here was his successor Tim Cook bringing one to market that Jobs was surely aware of before his passing. But in the next year, it did nothing more about the iPhone’s screen size as Android competitors continued to focus on larger screens for their flagship phones.

The competitive dynamic had limited effect on Apple in one important respect: iPhone sales continued to grow from 125 million in fiscal 2012 to 150 million in 2013. Apple was losing ground against the overall smartphone industry, but its share of overall phone sales continued to rise. Perhaps things were fine after all? With 94 million iPhones in the first half of Apple’s fiscal 2014, it might be easy to believe that’s still the case. 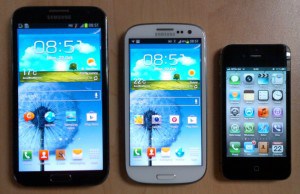 For at least the past 2 years, Apple has been losing some number of customers who wanted a bigger screen to Android. Whether their goal was better browsing, typing, video watching or game playing, the case for the bigger screen has been compelling for a long while. But the lost sales potential has been something of an ever-increasing gap, small at first and only recently something that likely has Apple execs especially concerned.

To sum it all up, Apple will change its plan. Expect new, bigger products coming from Apple by the end of this year.