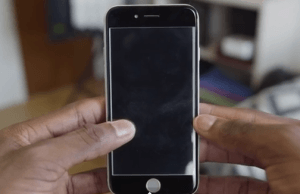 If the rumors hold true, the next iPhone could sport a nearly indestructible and perhaps flexible sapphire screen. That sound you hear is Apple muttering, “Bring it on” to device torture-testers everywhere.

A video making the rounds this week purports to show a sapphire crystal screen panel from the upcoming iPhone 6 withstanding some pretty serious scratches and stabs from a hunting knife and some keys.

It’s an impressive demonstration that, along with other rumors that the next iPhone’s screen could also be curved or flexible, means that those like myself in the device torture-testing community might need to up our game in the near future.

In the past, simply dropping a device (sometimes from great heights) has sufficed, but to literally scratch the surface of sapphire’s vulnerabilities is probably going to take a little more creativity.

We would all be interested to see how a sapphire screen stands up to extreme challenges. The video shows us how the iPhone 6 new screen can stand up to different extreme conditions like dropping it off, scratching the screen with your keys, or even knocking it several times on the desk.

Let’s take a look at the video, I think you’ll like it: