iPad 5 part leaks are making their way to online stores from a long time, even though we have mentioned plenty of them here on our website. The recent part leaks of iPad 5 are all suggesting that Apple is bringing the revised iPad design to iPad 5 but with design profile of iPad Mini with narrow bezels. The back-panel of iPad 5 is circulating online from last couple of weeks, and we have seen plenty of them suggesting that Apple is bringing thinner design to iPad. However, earlier this morning we came across to the front-panel of alleged iPad 5, and learned Apple is rumored to bring narrow bezels profile to iPad 5.

Update: A new report from Nowhereelse.fr – a French blog confirms that depicted iPad 5 case front-panel is actually an iPad Mini front-panel – so there is no fun left! 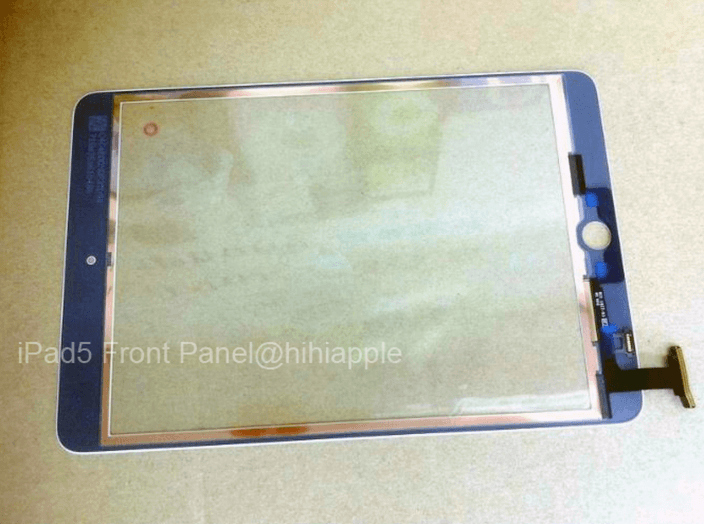 A redesigned iPad model this year is borrowing couple of characteristics from the cheaper version of iPad flagship devices, with slimmer and smaller bezel iPad Mini profile on iPad 5. A new image from Apple.pro claims to be the front-panel of unreleased iPad 5 device. At the moment of reporting about the narrow bezel design profile for iPad 5, we are yet to confirm the legacy of this leak. The recent front-panel leak line up with old iPad 5 part leak rumors, and suggesting the same designing profile. However, it is merit mentioning here that the source who have reported about this bezel has a good track record in pushing up latest leaks on unreleased iPhone and iPad devices.

Within the next 10 days, Apple is going to launch the next-generation iOS 7 and OS X to developers, and will begin the beta testing of major operating system updates. There are reports that sources will push more accurate reports during the beta testing, as iPad 5 will be entering in the production phase in mid of June to get ready the devices till July-August time frame.