Not long before the new version of iOS will be released, Apple has just updated us with a nice chart referring to the iOS 8 adoption rate.

While the rate was significantly lower a few months ago, it seems like the percentage has increased quite a lot, as it is now situated at 73%. To put things better into perspective, this means that 73% of all people who are using an iOS device are also using iOS 8, which is quite amazing, meaning that most of those with old devices have updated and got the new version of the software. 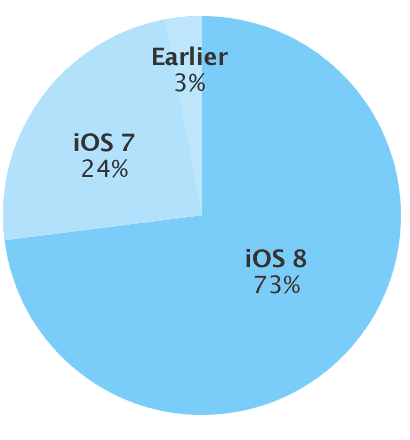 If you’re also interested about iOS 7, you may want to know that the software adoption rate is now at 24%. With this in mind, the last 3% is left to those with devices that have an older version of the iOS, just like my iPod Touch 1G which still works perfectly.

However, it is worth considering that iOS 7 was installed on 80% of all devices at the same time as now during 2014, which shows that the adoption rate for iOS 7 is not as high as we may have expected initially. However, the appearance of new devices means that those with older ones are left without a new software, which may be the reason why things are so.

Do you have iOS 8? If yes, have you ever thought about Jailbreaking it? Let us know your thoughts in the comment section below.