After weeks of silence on iOS 7 Jailbreak development topic, we are finally here with some ground-breaking hints from Jailbreak community revealing Jailbreak iOS 7 for iPhone / iPad / iPod Touch devices. iOS 7 Jailbreak was in development for a long time, but we are not confirmed that who is going to release the latest jailbreak in community. Both P0sixninja, and Evad3rs are currently working on iOS 7 Jailbreak for iPhone and iPad device. There were words that iOS 7 Beta Jailbreak has been testing in limited number of people from iOS Dev Team, and people who contributed to Cydia developments.

In the past, we have learned that hackers never released proper iOS exploit during the beta development of next-generation iOS system, instead they always seeded tethered jailbreak to cydia tweak developers. This year, we have noticed that iOS 7 Beta Jailbreak is also limited only to high-profile hackers to keep the iOS 7 Untethered Jailbreak development private from Apple and everyone around the world. 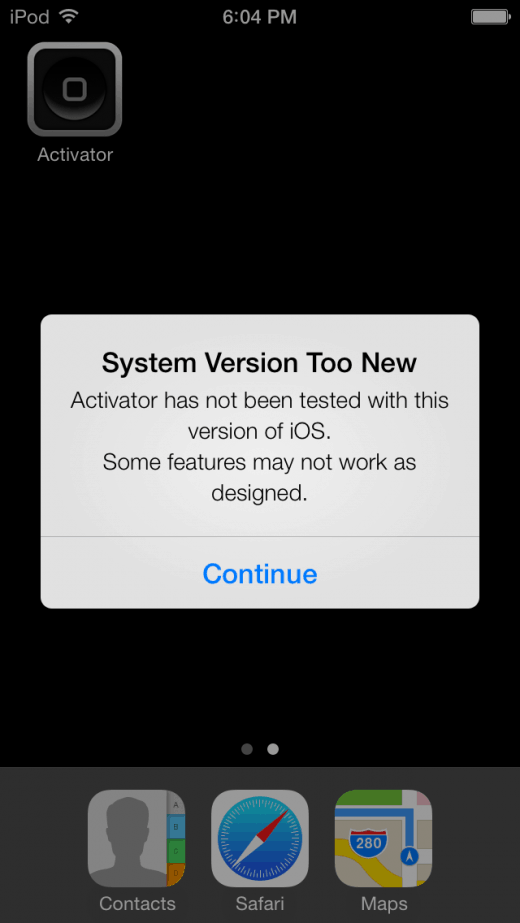 It is reported that Ryan Petrich, who is popular for his contribution to Cydia tweaks development over the years has posted an interesting screenshot of his iPod Touch running on iOS 7 Jailbroken. He revealed iOS 7 Beta Jailbreak for iPhone / iPad / iPod Touch by publishing his iPod Touch screenshot to Twitter users. It seems that hackers are now entering in the final stage of iOS 7 Jailbreak. Ryan revealed Activator warning message on iOS 7, revealing that your iOS version is too new for Activator and some of the tweak functions will not work perfectly.

Jailbreak iOS 7 is one of the most demanded term in the community, and we have seen how people are looking towards the development of iOS 7 Jailbreak. We hope that Evad3r’s or P0sixninja will release iOS 7 Untethered Jailbreak at WWJC 2013.