A snippet of code in iOS 7 beta 3 build hints that Apple is working on more effective camera lens for the upcoming iPhone 5S that can let users to record videos at 120-frames-per-second on their iPhone device. The iPhone 5S is going to feature a powerful camera lens that will also allow users to capture slow-motion videos on the go.

Over the years, we have learned that not a single time Apple able to avoid leaking new features of upcoming devices through iOS beta builds. Even the company has trolled everyone with a huge list of devices in iOS beta builds, but still there are couple of perks available to share with public. We have first learned that there is a hidden menu in iOS 7 beta that allow internal developers to play more naturally with user-interface and gestures on iPhone device. And now today, we are hearing that iPhone 5S will feature a 120fps video mode. 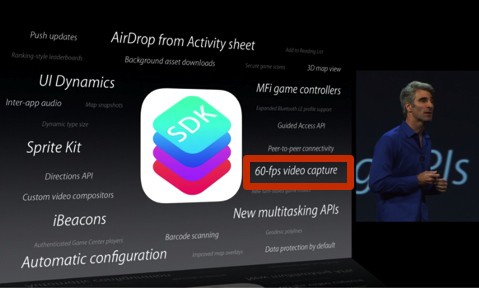 The new iPhone 5S camera feature is dubbed as “Mogul”, and allow users to capture more powerful videos via iPhone lens. Testing code has revealed the 120fps specification, but we are yet to know that on which resolution it will provide 120fps video-capturing feature. However, the super camera mode is suggesting that Apple is working on more powerful camera lens, and will shock the world once again.

In iOS 7 features, Apple has already revealed to developers that they can record videos at 60fps on their iPhone applications, but keeps secret the 120fps video capturing mode. There are already plenty of camera applications available in App Store that allow users to capture video at extended frame rates per second, but it is limited to 30fps – because of iOS 6 limitation.

Apple is extending iPhone features to next-generation, and clearly wants to meet up with Samsung features that they have offered in Samsung Galaxy S4. They are already allowing user to capture slow motion videos with 120fps on device. At the end, it is merit mentioning here that discovering a code snippet in iOS beta build for the upcoming device does not means that a feature is coming for real in the device.