We have reported several times that Apple is bringing a flat design on iOS 7 for iPhone and iPad devices. It has been reported that Jony Ive has gain control over the iOS department, and he is bringing significant changes to iOS 7 under his control. Moreover, Tim Cook revealed at D11 Conference that Jony Ive is controlling iOS Developers group at Apple, and will bring significant changes for users in the upcoming iOS 7 beta 1 build for developers. However, the iOS 7 new user-interface is currently a hot topic for everyone to follow up. 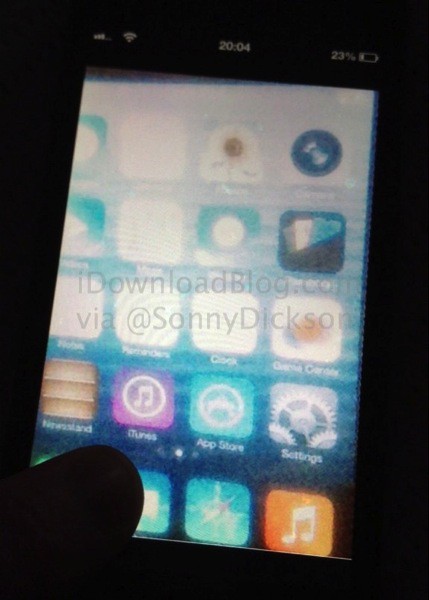 There are number of iOS 7 concepts available on internet, and many of them are covered by us on our blog. But it appears that someone has actually got access to iOS 7 alpha build, and reveals how iOS 7 flat user-interface is going to work on your devices. A screenshoot of iOS 7 alpha build is leaked online through reputable iDownloadblog, and the report also contrasts with 9to5Mac report. People over both blogs believes that purported image of iOS 7 screenshot is authentic, and it is from iOS 7 alpha version.

From what we’ve seen, we believe Jony Ive’s touch on iOS 7 will homogenize the look of Apple’s stock apps icons.

In the past we have learned that Jony Ive is dropping Scott Forstall’s favorite user-interface of iOS in the core applications to truly bring revolution to iOS core system. In addition to this the iOS 7 will look more clutter free and elegant with black & white borders.