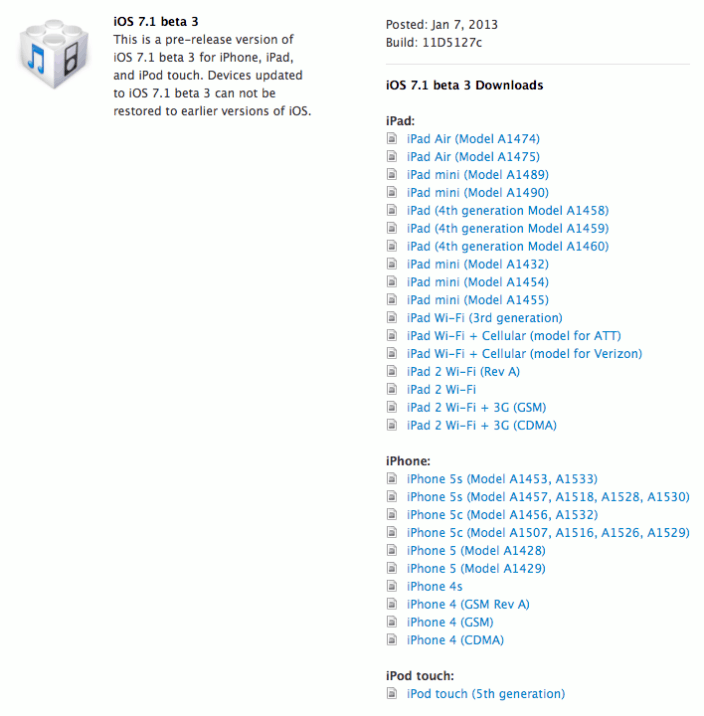 Latest iOS 7.1 beta 3 download brings major changes in iOS core system, and bug fixes over iOS 7.1 beta 2 running devices. Furthermore, we learned that Apple is not going to launch iOS 7.1 to public before March, 2014. There was a report that Apple is working with auto-mobile partners for iOS in Car system, and iOS 7.1 to feature the full compatibility of this new function. Therefore, there will be a delay in the launch of iOS 7.1 in public.

iOS 7.1 beta download links are coming shortly on our download page here, and you can install iOS 7.x beta on your device with following our easy guide. The iOS 7.1 beta 3 brings major UI changes for iOS 7 Keyboard, Phone dialer interface, and as well as for power-off interface. In the meantime, we are tracking the latest changes of iOS 7.1 beta 3 for iPhone and iPad devices. You can bookmark the page to get iOS 7.1 beta 3 download links.

A compatibility behavior has been added to address an issue where some web servers would send the wrong Content-Length value for “Content-Encoding: gzip” content. Previously, NSURLConnection and NSURLSession would send a “network connection was lost” / NSURLErrorNetworkConnectionLost (-1005) error in this situation.

The compatibility behavior applies only if the Content-Length value exactly matches the expanded gzip’d content. It won’t apply for “off by 1” or similar miscounting.

Creating a new iCloud account during setup assistant, should no longer give you an error when you enable iCloud Keychain.

Workaround:Tap the error icon to re-send the message.

A property, minimal-ui, has been added for the viewport meta tag key that allows minimizing the top and bottom bars on the iPhone as the page loads. While on a page using minimal-ui, tapping the top bar brings the bars back. Tapping back in the content dismisses them again.