You are here: GeekSays Technology News » Apple » iOS 7.0.4 Update Getting Ready To Launch In Public

After the launch of iOS 7.0.3 update, now I can say that many users have updated their device to iOS 7.0.3 update, since it brought many bug fixes for the iOS 7.0.x running devices. Apple has almost fixed every known issue in the latest update for iOS 7 running devices. However, it appears that iOS 7.0.4 is also ready to launch as a public update. We have noticed little bump in the usage of iOS 7.0.4 in our servers, and as well as the iOS 7.1 tracks in the system. 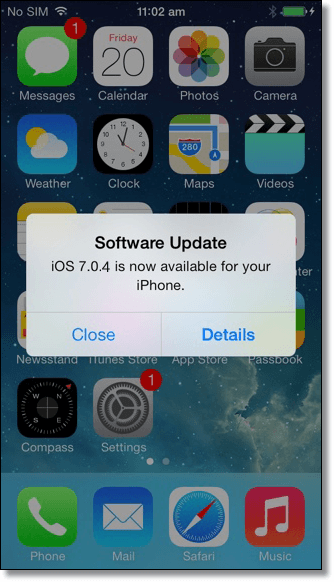 The iOS 7.0.4 update can be released any time after the initial testing, as we speculate that current bumps are coming from the internal section of Apple’s employees who must be testing the latest update with general fixes. The iOS 7.0.4 running devices tracks are bumping more clearly in the stats for us, and as well as for many others. The update is still not profiled with any known issue, and therefore we believe it must be carrying minor fixes.

The iOS 7.1 tracks are not new in the stats, we have already reported in the back about the update preparation but after that stats get disappeared as Apple started focusing on iOS 7.0.4 release in the public. We are keeping a narrow eye on the iOS 7.0.x development, and believes that it can reach public launch in the upcoming week.