Apple has released iOS 10.1.1 download update for iPhone and iPad devices. The iOS 10.1.1 firmware update is targeting minor bug fixes and general improvements. According to Software Update information, the iOS 10.1.1 fixes Health app data on iPhone devices.The update is available to download through both OTA and full IPSW download option.

iOS 10.1.1 download comes after a week of public launch of iOS 10.1 update for iPhone/iPad devices. The update is targeting a fix for Health data becoming unviewable for few iPhone and iPad users. You can download iOS 10.1.1 using OTA update directly on your iPhone/iPad or using the iTunes Software Update. 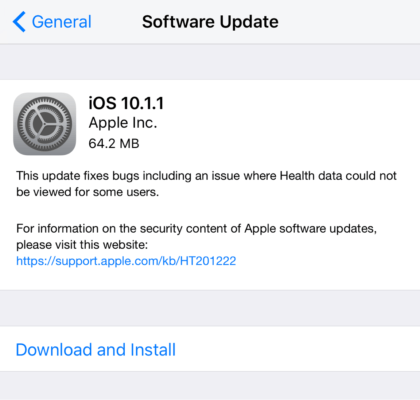 Apple is taking an aggressive approach in fixing iOS 10 related bugs for iOS users. They have recently rolled out a major iOS 10.1 update to bring a new feature of Portrait Mode Camera feature for iPhone 7 Plus users. Within a week of iOS 10.1 release, there is a minor update available under iOS 10.1.1 firmware update.

In iOS 10.1, Apple has fixed variety of security bugs and one of them in particular which allow hackers to gain control of iOS devices running iOS 10 firmware. If you are running an iOS 10 firmware on your device, it is recommended to update your device to latest firmware as soon as possible.

However, in the case if you’re waiting for the iOS 10 jailbreak release, you can safely update your device to latest firmware. We heard Pangu will launch a combined tool to bring iOS 10 jailbreak on all released iOS 10 firmware’s before the release of tool. It means they will include iOS 10.1.1 as well in their jailbreak tool.

You can always wait for Pangu and other jailbreak hackers to bring jailbreak tool, but it is not recommended at any level. You need to update your device to make sure your data is protected and your device is not becoming a part of next attack targeting the internet. Hackers have started controlling a range of devices connected with Internet to attack different services. Apple and many other are taking security exploits seriously.

How to Download iOS 10.1.1 Update for iPhone and iPad:

Step 1: Take a backup of your iPhone/iPad device.

Step 2: Make sure you have a stable internet connection.

Step 3: You might need to connect your device to charger or you need to have more than 60% of battery on your iPhone/iPad device.

Step 7: Once the update downloads, the iOS will ask you to install it.