You are here: GeekSays Technology News » Recommends » App of the Week » InstaVelox – Brings Instagram To Your iPhone Springboard

Everyone knows that the tweak named Velox from the day was released in the Cydia store has gained a lot of fame due to the new idea. Simply and sleekly, the Velox was released to modify the options for iDevices itself, operating other default operations directly from the springboard is what Velox really did. But with all sudden fame in the jailbreakers community,  other developers also start taking the tweak seriously and came up with the similar ideas and created insane add-ons and with the help of this Velox was on everyone’s mind just in few weeks, before Velox, Auxo was the hot tweak but Velox cleared all the sheets and digged its flag. 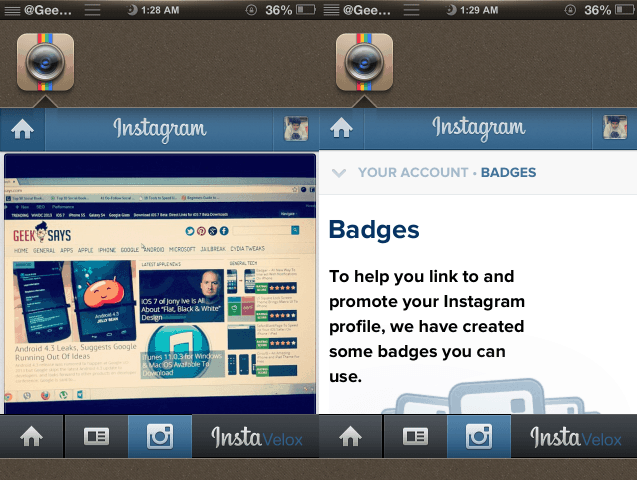 The famous add-ons of Velox today will get the taste of Instagram by the new released InstaVelox in Cydia. The tweak add-on simply explains itself by the name; by the InstaVelox tweak you will be able to access your Instagram profile, friends profile, picture feed directly from the InstaVelox instead of entering the application. There are three touchable icons, one will show the picture feed, the second will show you your profile and the third your pictures. You can like, comment directly from the springboard by the help of InstaVelox. The add-on has a major drawback, you can’t directly Instagram your pictures from the springboard by the deed of InstaVelox.

The tweak is available for free from the BigBoss repository.

I'm a Bachelor of computer applications and all round tech guy. In my spare time I enjoy singing, cooking and reading.