Another Chinese smartphone manufacturer seems to be working hard in order to reach the top. We’re talking about Meizu, a brand who sells incredibly well in China right now and honestly, they have everything needed in order to try hitting other markets.

Today, their first device from the new Blue Charm line-up, Meizu m1 note, was announced and we must admit that we’re impressed after seeing what this phablet will offer for just $160. 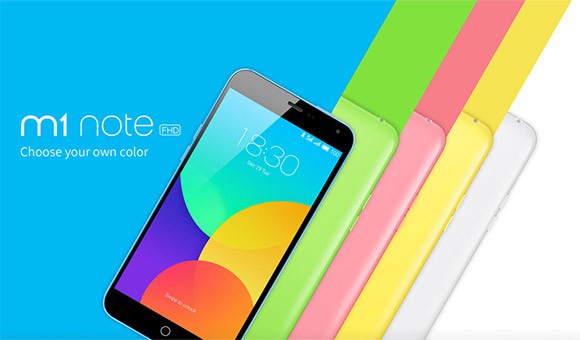 Yes, phablet, as it sports a 5.5″ IGZO display, with an 1080p resolution, resulting a density of 403 ppi. The Meizu m1 also comes with a unibody polycarbonate chassis, according to the manufacturer’s website, with two SIM card slots, being available in green, pink, yellow, blue and white.

When it comes to the internal storage, we currently know just about a 16 GB version, available at the above mentioned price, but we’re pretty sure that a 32 GB Meizu m1 note is going to be released too, since the unibody design implies the lack of a microSD card slot.

On the back of the phablet, there’s a 13 MP Samsung-made camera, being able to shoot 1080p videos, while the front-facing snapper features a 5 MP sensor, perfect for some video calls or selfies.

Currently, we don’t know anything about the price or the availability, but believe us, we’d be delighted if this company decides to make an appearance at CES 2015. What, one can dream, right?

What do you think about the Meizu m1 note? Would you buy this cheap high-end phone?