Google has finally blessed the iOS users with the major update of Google Maps 2.0. Last weekend, Google rolled out number of new features to Android users and made them exclusive to the devices for specific moment. However, after a week of initial launch of Google Maps 2.0 to Android users. The Google Maps 2.0 update is now available for iPhone / iPad / iPod Touch users. Google introduced number of amazing features in this major update to iOS users. One of the most prominent feature is the human-interface changes, and the adoption of iPad and larger screen devices on board with running iOS. 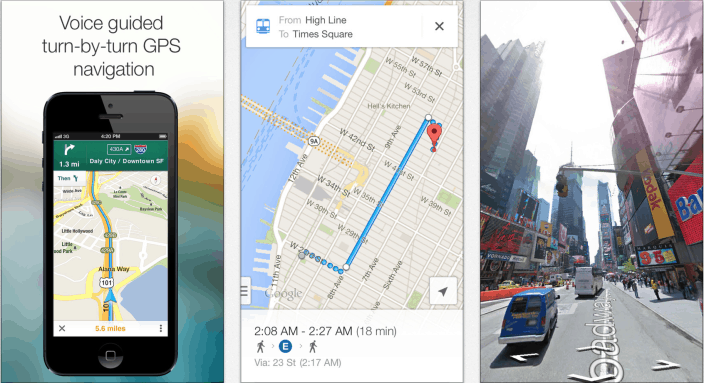 Google Maps 2.0 for iOS now supports iPad, and iPad Mini resolution. It is now not only limited to iPhone and iPod Touch devices. The new Google Maps 2.0 offers indoor mapping, offline caching of specific map area on iOS devices and much more. It is now featuring an Explore version of Maps that allow users to easily discover the high-rating places around their location. It provides complete data of popular places using the Zagat rating, and Google Deals. It offers real business to users on both iOS and Android Platform.

Google is enhancing the Google Maps with the launch of Google Maps 2.0, and Apple is still struggling with its 3D modeling and mass correction of Apple Maps for iOS devices. Google takes a year to produce compatibility for iPad devices, and during the time world was stuck with web-version of Maps or Apple Maps that are available natively on iOS.

Google Maps 2.0 for iOS also features the live traffic reports, and incident reports using different metrics. It allows users to easily evade any serious kind of problem near to them. No Google is not providing any information to avoid Police roadblocks, it is just offering live traffic jam reports and incident reports near you. Google Maps 2.0 for iOS is now available in U.S. App Store, but some of the features are still rolling out for US users.