You are here: GeekSays Technology News » Google » Google and Qualcomm are working on the Tango smartphone

A few months ago, Google was announcing the Tango tablet, a revolutionary device, with 3D image capturing abilities and environment recognition. It was available only for developers and anybody who wanted to explore the possibilities offered by its 3D functions could get it from the Google store.

They’re making a smartphone too!

Recently, the search engine giant announced a partnership with chipset manufacturer Qualcomm, which will result in the first Tango smartphone. Basically, the handset will use the same principles as a tablet, but, since it’s a smaller device, the possibilities of usage will be increased, according to The Next Digit. 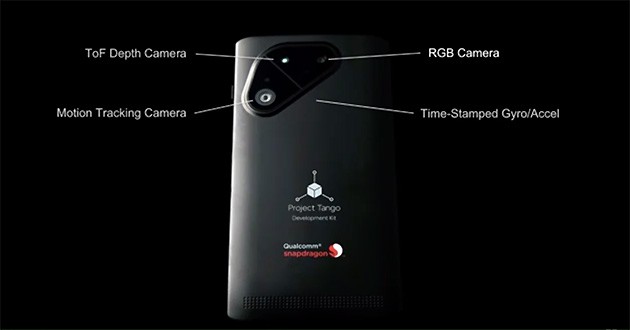 The tablet had a pretty impressive spec sheet, featuring a full HD resolution of 1920 x 1080 pixels, on a 7″ display. Also, it packed 4 GB of RAM and an internal storage capacity of 128 GB. Naturally, we expect the smartphone to come with at least 3 GB of RAM, a Snapdragon 810 octa-core CPU and a similar storage capacity.

Of course, the most impressive aspect of this Tango smartphone will be the camera, which will be synced with a depth sensor, so the possibilities offered by this device will be great. Just imagine that you will be able to create a virtual environment just by using the sensor any the captured image data.

The above mentioned source states that as a part of testing, Google has already sent the Tango smartphone into space, as a part of their collaboration with NASA’s Ames Research Center.

It’s not coming for cheap

As for the launch date or the price, there are no details currently, even though there are some rumors pointing to a launch scheduled for the third quarter of the year. Since the tablet had a price of about $1000, we don’t expect the Tango smartphone to be cheap, but it should get cheaper in a few months.