Another day, another Lumia, this seems to be the trend lately. Yesterday, we saw the first images with the Microsoft Lumia 535, but still, we weren’t that impressed, since it was basically an entry-level device, designed to test how well the market will receive the new brand. But these guys are up to more serious stuff too…

The Microsoft Lumia 940 will be the first flagship released under the new branding, and, according to Phone Arena, it will pack some serious processing power. And by serious we mean a 2.7 GHz quad-core Snapdragon 805 CPU, teamed up with 3 GB of RAM, while on the back, we will – most likely – find a PureView camera with a 24 MP sensor, able to shoot 4K videos at 60 fps. Oh, and the front snapper will also be pretty nice, as thanks to its 5 MP, your selfies will look better than ever!

Check out this leaked image with the specs: 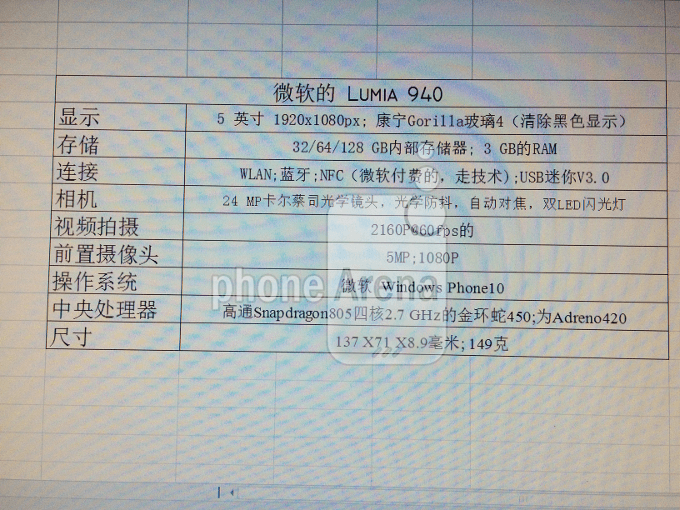 And that’s not all. the 5″ 1080p display will apparently be one of the first covered with Corning’s Gorilla Glass 4, according to some leaks from a Nokia supplier factory. As far as we know, Gorilla Glass 4 wasn’t even announced, so we’re guessing that we still have to wait a bit until the Microsoft Lumia 940 will make its debut.

Last but not least, this device will bring another premiere: a new operating system. We’re talking about Windows Phone 10, which was recently been launched, confirming that “wait a bit” could turn in “a few months until we will actually see this phone.

We don’t know about you, but we’re pretty enthusiastic after finding out all these details. If the Microsoft Lumia 940 will indeed pack this specs and if WP 10 turns out to have fixed all of those issues encountered on 8.1, those Android phones out there should be very afraid. Just sayin’…