Transcription represents an issue that people from all around the world had to deal with at a certain moment in time. In today’s world, when applications such as Facebook and WhatsApp allow you to send sound messages when you don’t feel like typing, listening to them can be a pain for the receivers of the message, under certain circumstances.

In order to make sure that regardless of where they are people can see the message behind a voice note, Facebook is now thinking of automatically transcribing every voice note, as long as it is in a language that they support. 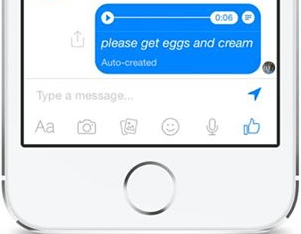 In order to test out the feature and see if people are happy with it, Facebook has decided to go ahead and offer it on a couple of different accounts, so that they will get valuable feedback from a certain number of users before releasing the new feature to the masses- 500 million users.

An example where this feature may be really useful is when you’re surrounded by family at home and texting. Suddenly, your friend sends you a voice note and you have no idea related to what’s inside it. Instead of going to grab your headphones, or heading to a different room, you can easily enable the transcription feature which will automatically do the job for you and allow you to read the voice note. The principle can apply to many other circumstances, including while being at a concert, meeting, in the library or simply when you do not feel like listening to the voice of your friend, and you’d rather text and read.

Based on everything that has been outlined so far, what do you personally think about Facebook’s plan to enable this kind of transcription in their Messenger App? Do you see yourself using this new feature? Why or why not? Let us know your thoughts in the comment section below.