Facebook already have handful of iOS applications in the App Store for both iPhone and iPad devices to stick users with their online social network services. However, if you are missing some crunch from Facebook on your iOS devices, then here you go with a brand new Cydia tweak that allows you to pull your NewsFeed RSS on the iPhone or iPad lockscreen.

While Facebook has already launched a useful application Paper from its Creative department, the application has its own pro and cons for the users. The new jailbreak tweak entitled Facebook RSS is here to deliver your Facebook everywhere on your iPhone. 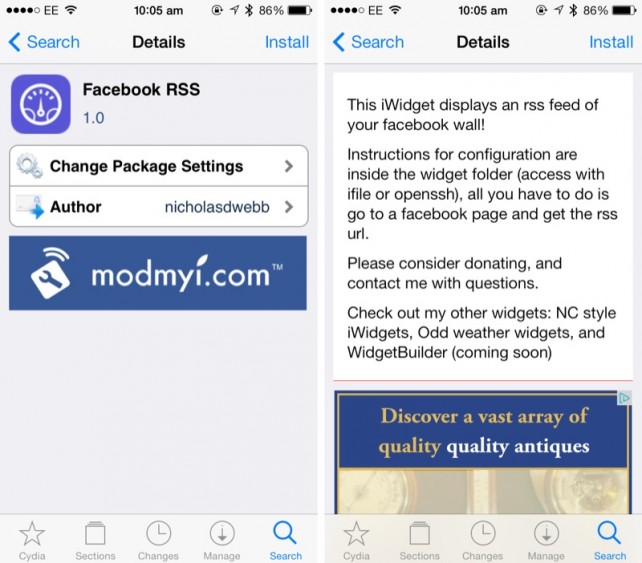 The tweak is available for free of cost in Cydia Store, and you can download Facebook RSS tweak to add a widget on your iPhone or iPad screen. Furthermore, it can be customised according to anyone’s requirement but it needs you to have access to iOS file-system.

In meantime, the Facebook RSS Cydia tweak works as it is advertised in ModMyi repository. The tweak simply syncs with your Facebook account to bring latest Newsfeed updates on your iOS device Home Screen.

Facebook has long time wish to include its services in mobile OS, and Android users have already received a customer Facebook OS for their phones, while Apple always protects iOS users from such accidents. We have seen how people criticised Facebook on their plans of launching a social network phone in the market. The first try from Facebook gets nowhere, but the rumor says they are still working on new things for mobile users.