iOS 7.0.3 Download is available now for iPhone, iPad, and iPod touch users. Apple has rolled out the latest iOS 7.0.3 update for all iOS devices, including latest iPhone 5s, and iPhone 5c. The iOS 7.0.3 download is available via over-the-air update, and as well as complete Software Update from iTunes. Apple has released the iOS 7.0.3 in public with latest security patches, and bug fixes. The new iOS 7.0.3 update will remove all the lag, and BSODs from your latest iPhone 5s and iPhone 5c devices. 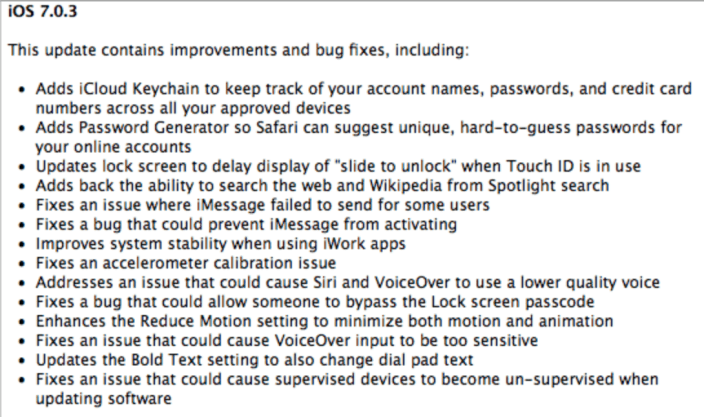 Apple has majorly focused on the security, bug fixes, and overall improvement of iOS 7 in this minor update. Users can download iOS 7.0.3 update from below mentioned direct links, and as well as from an OTA update on their devices. However, it is suggested that users should perfrom a clean installation of iOS 7.0.3 on their devices.

iOS 7.0.3 Download is the biggest iOS bug fixes update rolled out since the launch of iOS 7. Apple has nearly fixed everything on iOS 7 in iOS 7.0.3 update that said to be causing any issue on end-user’s devices. Apple has rolled out an iOS 7.0.3 update with sensors fixes, iMessage fixes, and introduction of iCloud Keychain on iOS devices. The update also fixes the bug with Touch ID on iPhone 5s devices.

In addition to introduction of iCloud Keychain, Apple has introduced a password generator in Safari to allow users generate strong passwords for their digital properties using an iOS devices. The update can be downloaded through OTA update and as well as via Software Update through iTunes.