Evasi0n7 Jailbreak tool receives its first ever update from Evad3rs team to fix some privacy issues, and general compatibility issues with iOS devices. The iOS 7 jailbreak tool is now states as evasi0n7 v1.0.1 for both Windows and Mac OS devices. Major focus of this update was to secure Chinese users from pirated applications store, Taig. We have already heard about Taig, and its contract with Evad3rs over iOS 7 Jailbreak. 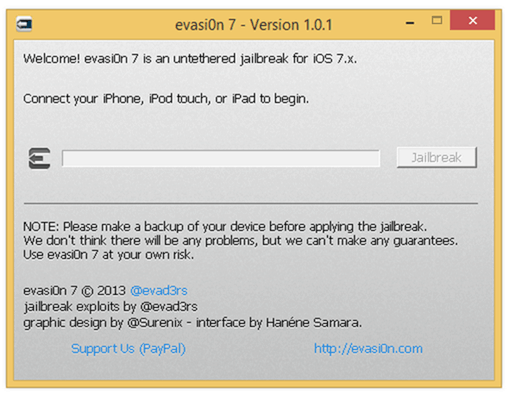 It appears thing didn’t go well for both parties, especially for evad3rs team. The whole jailbreak community blacklashed the latest iOS 7 Jailbreak tool for promoting other tool than Cydia for iOS 7 by default in China. The main concerns was the privacy breach because of the application, the Chinese store was said to be uploading the users data to servers without any permission. However, the new version of Evasi0n7 v1.0.1 is now offering clean iOS 7.0.4 Jailbreak to all range of users without any Chinese application.

On the other hand, GeoHot, the first jailbreak developer also stated evasi0n7 jailbreak tool is clean for everyone, and itself does not upload any of its user data to servers. The members of evad3rs removed Taig from their tool, and announced they have not received any payment from Taig or any Chinese company for the jailbreak exploit.

You can download evasi0n7 v1.0.1 jailbreak tool for both Windows and Mac OS: