You are here: GeekSays Technology News » Apple » Did LG just reveal the all new 8K iMac?

When it comes to releasing new devices, Apple manages to keep most of their plans secret. Of course, if we talk about iPhones or iPads, things are a bit different, as different parts of them are usually leaked with a few months before the launch event. On the other side, an 8K iMac, for example, is something about a lot of people had no idea.

Until today, that is, as LG might have accidentally outed Apple’s new desktop, through a press release which was supposed to praise their own 98″ 8K TV. 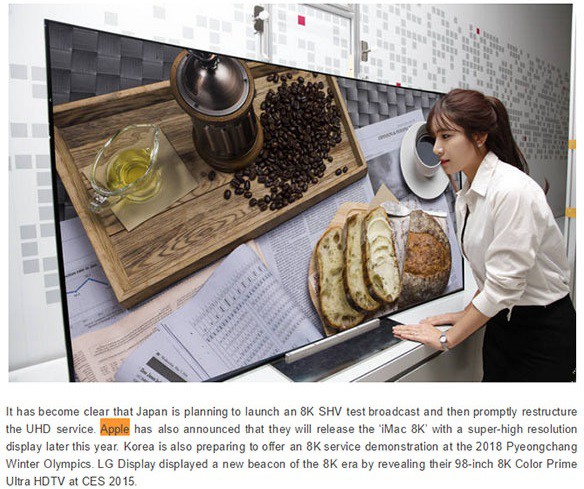 For those of you who don’t know, LG is one of Apple’s suppliers, making the 5K display currently used on the 5K Retina Display iMac, so they have access to a couple of insights regarding the Cupertino-based company’s plans. And by plans, we also mean the upcoming 8K iMac.

According to Stuff, LG mentioned in the press release that they’re not the only company which will release an 8K display, since “Apple has also announced that they will release the iMac 8K with a super-high resolution display this year”. Uhm…Oops?

We don’t know if this is just a mistake, an inaccurate piece of information or maybe even a detail intended to be revealed, but just think at it: 7680 x 4320 pixels, the highest resolution the human eye is capable of seeing. The image quality on this mysterious 8K iMac will be above impressive!

Unfortunately, LG didn’t say anything about the size of the desktop, but it shouldn’t be bigger than 27″, size currently featured on the 5K retina iMac. Just imagine the pixel density on this baby…

Currently, there aren’t any details about the upcoming 8K iMac, but make sure we will cover the topic as soon as anything new comes up.