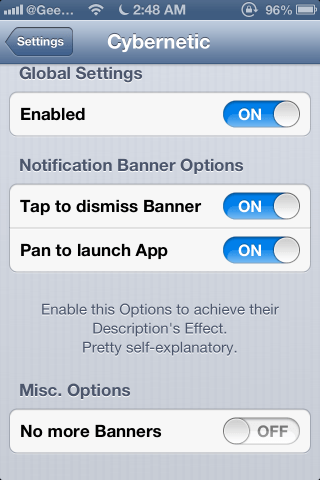 Cybernetic is appeared to be one of the best notification banners tweak that is available now in Cydia Store. Cybernetic allow users to reverse Notification Banners gesture settings and avoid accidental clicks, and frustration moments on iPhone and iPad devices. It comes with a very straightforward settings menu that allows you to enable the specific part of tweak, and customize notifications / alerts on your iPhone devices. Cybernetic swipe over notification gesture opens the application, and perform the normal notification / alert process on iOS devices, while taping on the notification can dismiss it quickly without causing any problem.

Cybernetic is available in ModMyi repository for free of cost, you can use it to make yourself comfortable on iOS with notification banners.