Apple introduced several new features in iOS 7 including all new card-style App Switcher for iPhone and iPad devices. The new App Switcher layout received mixed comments from iOS community. Many people liked the new change on their devices while other blames Apple for spoiling their traditional iOS app switcher interface. However, if you are one of those who do not like the new iOS 7 card-style App Switcher then I have a new Cydia tweak for you to get rid of iOS 7 App Switcher easily. 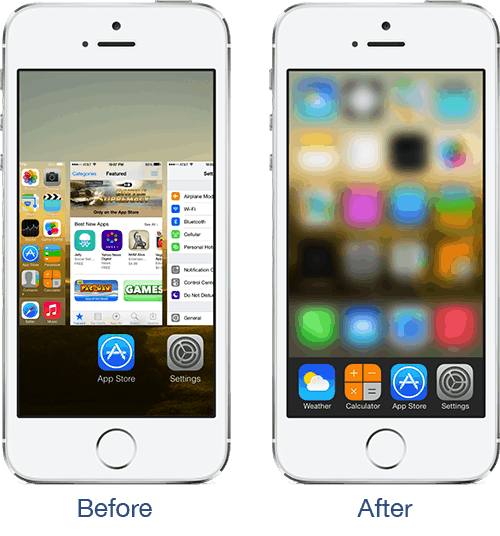 You can install the tweak to remove new App Switcher layout, and bring back the old one to your iOS device. The iOS 6 old-style app switcher is pretty cool for many, but personally I believe it works as a reliable function on iOS devices, but a bit boring.

We are seeing the iOS 6 like app switcher since the early days, and with iOS 7 rollout, Apple targeted new user-interface for users. I know many of you liked it, but majority people disliked, therefore, iOS jailbreak development community is working on bringing some of the old features on latest iOS 7.x.x running firmware.

ClassicSwitcher is not just a rebirth of old-style app switcher on iOS 7 running devices, but also offering new features for the iOS 7 users. It allows you to add multiple rows of app icons in your App Switcher, and as well as blur the remaining part of the home screen.

It comes with a very simple settings panel that allows you to customize the App Switcher at next-level. It let users simply enable or disable the tweak with an option, and as well as set a dialogue box that asks you for confirmation before closing any application on your iOS 7 running device.

You can get your hands on ClassicSwitcher in BigBoss repository of Cydia Store.