You are here: GeekSays Technology News » General » Clash of the Week: iPhone 6 vs. HTC One M8

The iPhone 6 and HTC One M8 are two of the most desireable smartphones on the market today. Both of these handsets offer high end specs, amazing screens and cutting edge designs. Both the Apple and the HTC One would make great choices for anyone interested in a new phone, but which one is the best to buy? Well, the truth is that both of these phones have great features that would make them work well for just about anyone. However, there are still a couple of differences between these devices that are important to keep in mind when it comes down to making your final decision.

Let’s take a closer look at the two to see how they stack up. 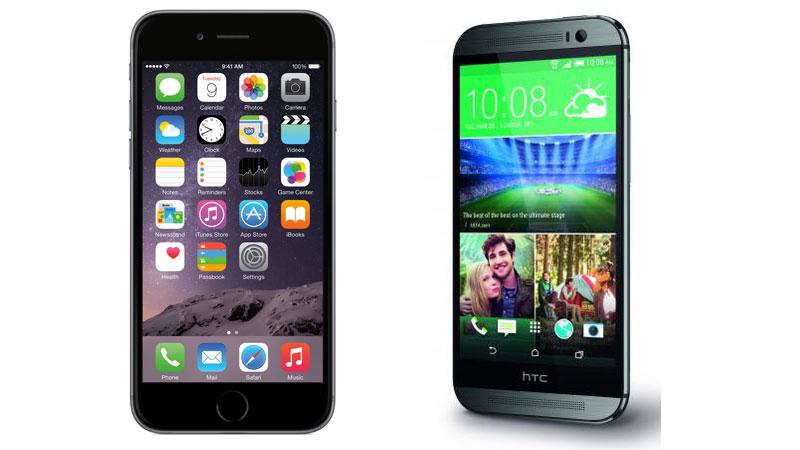 Both the iPhone 6 and HTC One M8 feature a curvy, beautiful design so it’s difficult to find any fault in either. However, for those of you who are not crazy about using a rather large smartphone the iPhone 6 may be a better choice as it is 2.5 milimeters thinner, 12.2 milimters shorter and 3.6 milimeters narrower than the HTC. There is no big difference in screen size between the Apple and HTC One as the iPhone 6 is 4.7 inches and the HTC One measures in at 5 inches. Both phones are made of aluminum, built very well and definitely look like premium smarthphones. Consumers have 4 color choices with the HTC One M8 (red, gold, silver and gun metal) and three with the iPhone 6 (silver, gold and space gray). 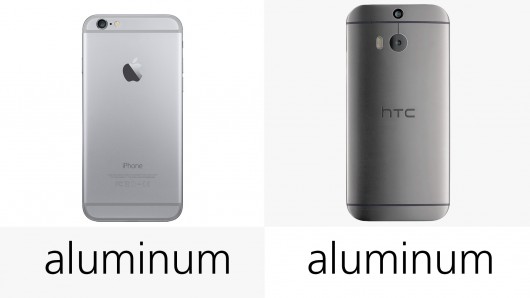 Comparing the operating systems between the iPhone 6 and HTC One M8 is akin to comparing apples to oranges. But for comparison’s sake, here is the run-down on the two operating systems. The iPhone 6 gets its power from Apple’s latest iOS 8 which brings with it HealthKit, HomeKit and 3rd party keyboards to Apple’s mobile OS. What makes the HTC One M8 tick is Android 4.4 KitKat. Inside the iPhone 6 is an Apple A8 processor which is a dual core chip that runs at 1.4 Ghz with 1GB RAM. The HTC on the other hand sports the Qualcomm Snapdragon 801 processor that features 2.3 Ghz with 2GB of memory. The HTC would probably be a better phone for those people who want more freedom and access to more features.

Winner for number of features: HTC One M8 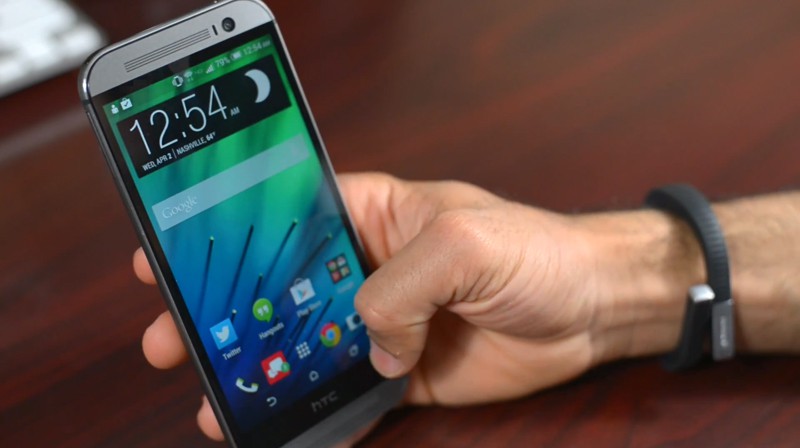 Winner for ease of use: iPhone 6

The One M8 is an excellent performer among Android smartphones. With its quad-core, 2.3 Ghz Snapdragon 801 processor and 2 gigs of RAM, this handset will not disappoint even when used by hardcore gamers or when watching full HD video or multi-tasking. It may seem as though the HTC would blow the iPhone 6 out of the water as far as performance goes because the Apple has “just” a dual core CPU. However, it is not that simple as the Apple A8 processor is more advanced than Snapdragon 801 as Apple’s processor is 64-bit while HTC’s is 32-bit. Apple claims 10 hours of talktime on one charge with the iPhone 6 while HTC says users will get double that with the M8. Both phones pretty much match up performance-wise but if it’s better battery power you’re looking for, the HTC wins out.

The HTC One M8 uses what HTC markets as an “UltraPixel” camera which is one that has an larger-than-average pixel size of 2 microns, one-third of an inch sensor size and a wide f/2.0 aperture. The camera’s resolution is only 4 megapixels at a 16 by 9 aspect ratio, making this camera sufficient for the average photographer’s needs. On the backside of the HTC is a secondary camera that is there to measure depth informatin. This allows certain effects to be applied to photos once they’ve been captured. The HTC uses two sensors and two lenses to help produce photographs with a 3D element and photos with blurred backgrounds, making photos appear as though they’ve been taken with a very pricey camera with a fancy lens. The One M8 takes sharp, clear photos and tests out well in terms of shutter speed and overall performance.

The iPhone 6 comes with a 8 megapixel 1.5 micron f/2.2 iSight camera. The camera features an all new sensor that includes focus pixels as well as a new image signal processor.  The iPhone 6 camera focuses quickly and captures clear, sharp photos, making this an excellent camera for both novices and more serious photographers. Like the One M8, the iPhone 6 has flash that uses two LEDs. Apple has found the perfect balance between megapixels and pixel size with its iPhone 6 camera. And, because Apple is now offering camera controls for 3rd party apps, this phone’s camera would please just about everyone. However, when it comes down to which phone wins at this chapter, then I would probably call it a draw. 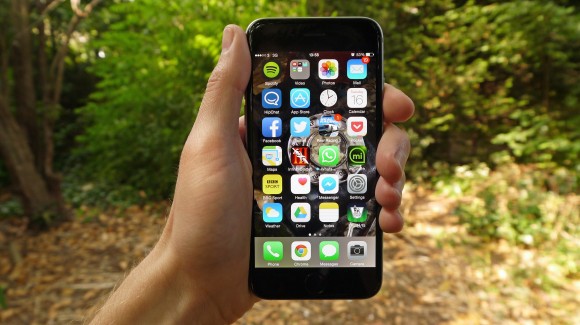 As mentioned earlier, the iPhone 6, according to Apple, gives you 10 hours of usage time between battery charges while HTC says the One M8 provides 20 hours of usage time between charges. This makes the HTC the clear winner in terms of battery power so if you’re a heavy handset user, you’d be better off going with the HTC as the iPhone 6 will have you looking for a power outlet to use more often.

However, we should also point out the fact that neither the HTC One M8 nor the iPhone 6 feature removable batteries, so this represents an issue for both of these phones. Chances are that if one of them did indeed feature a removable battery, then it would surely be named the winner when it comes down to this aspect.

Both the HTC One M8 and Apple iPhone 6 are excellent choices in smartphones. Both phones feature great designs, have good cameras and impressive specs. If you want a phone that’s easy to operate, then the iPhone 6 may be best for you. But if you prefer more flexibility, the Android-powered HTC One M8 allows you more freedom as you can customize the smartphone and have access to more features.