You are here: GeekSays Technology News » Android » Brace yourselves, Android Silver could come sooner than expected!

We’ve all heard the rumors about Google ditching the Nexus line and it seems that this is going to happen sooner than expected. While all the rumors are pointing to Android Silver devices being released this fall, Google might offer us a hint about the upcoming events.

Currently, there are only three Play Edition devices left in the Play Store: HTC One M8, Samsung Galaxy S4 and the Motorola Moto G. So what happened to the HTC One M7, Sony Xperia Z Ultra or the LG G Pad 8.3? Well, after a period being listed as out of stock, it seems that now they’re completely gone. 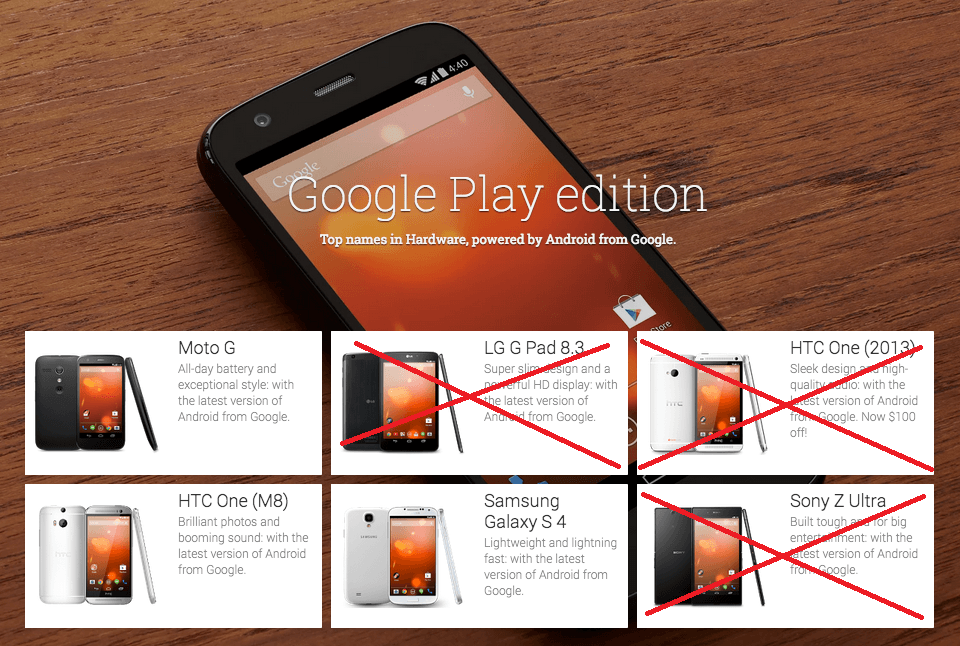 Like mentioned above, this could be another hint to Google’s future plans. This isn’t the first time the would do something like this, so there might be some truth here.

As for Android Silver, it is already known that it’s Google next program, aiming to work more closely with top manufacturers in order to match premium specs. If these phones and tablets will met the required specs, then they will be sold as ‘Android Silver’ devices.

But what about all the latest news about Nexus 9 and Galaxy S5?

Still, there are also rumors about a new Nexus devices this year, most likely a 9 inch tablet, made by HTC and codenamed ‘Volantis’. Also, there were some leaked pictures with a Play Edition Samsung Galaxy S5 a few days ago, so the Play Editions could still be around us for a while.

Any thoughts on this? How long do you think we’ll have to wait until we’re going to see the first Android Silver device?