Blackberry has already announced its plan to officially bringing BlackBerry Messenger Services to both iPhone and Android devices after losing the big business point to other companies. The company confirmed that BBM for iPhone and Android is both in works, but requires time before making a public debut. Many users around the world got excited by BlackBerry decisions of making its messaging services cross-platform after losing its whole business to Apple and Android devices. BlackBerry Messenger release date was not announced at media event, but earlier this week we have learned that some rumors are floating here and there confirming that BlackBerry will release BBM for both Android and iPhone at June 27. 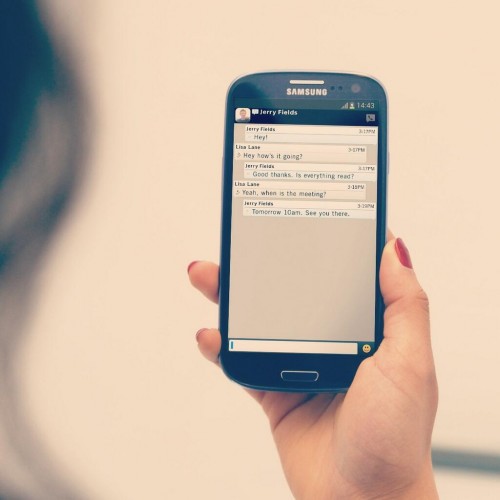 Despite no official confirmation from BlackBerry on BBM launch for third-party platform, we have seen T-Mobile UK twitter account jumps into the matter and release June 27 as the launch date of BlackBerry Messenger for both iPhone and Android devices. It is really weird to hear such important announcement from a carrier social account than company’s itself press-release. The report from UK T-Mobile twitter accounts which is a verified account on Twitter, we have learned that BBM for iPhone is coming around June 27th, and will soon available for everyone in App Store and Google Play Store.

A tweet from T-Mobile UK twitter account with an image of Samsung Galaxy S3 reveals BBM running on Android with words that it will go live for everyone at June 27th. We have learned that BlackBerry PR members are declining the rumors coming from T-Mobile UK twitter account, and saying they have no information to share about BBM launch for cross-platform devices. BlackBerry Messenger for iPhone and Android is going to be a biggest competition for application / services like WhatsApp and Viber that are already under the axe by different governments.