You are here: GeekSays Technology News » General » BBM for iOS and Android Available To Download

BlackBerry Messenger (BBM) for iOS is now finally launched in the App Store for iPhone and iPad devices. With lot of drama lately, BlackBerry has got little attention this week from several different media outlets. However, this is the very first time BlackBerry is bringing its BBM services on third-party devices. But isn’t it too late for BlackBerry to join the pool? 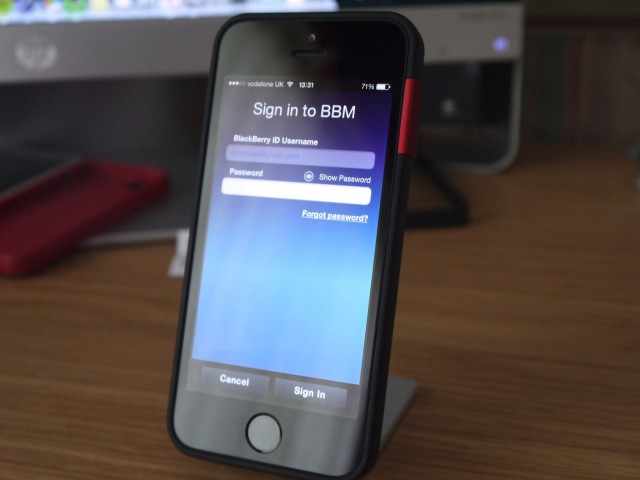 Especially when some third-party applications like WhatsApp and Viber are already ruling iOS and Android devices with their extra efforts to make a messaging application for cross-platforms. BBM for iOS and Android is now entering the market, and BlackBerry already has a wide-range of fan base who are addict to BBM services on their BlackBerry phones. With the passage of time, we will see how BlackBerry dominates the third-party devices with its services.

BlackBerry Messenger is now available for free of cost on Android and iOS devices. Users will be required to sign-in using their BlackBerry ID and Password to get their hands on BBM services. The BBM ID will then bring your own BBM-PIN to add and connect with other users over BlackBerry Services.  BlackBerry is a bit different from other services that are available in the market and will provide more security over the cross-platform messaging application. You will not be required to give out your phone number in order to get in touch with other users, and you will also miss the automatic sync of your contact book.

With more privacy and powerful service on board, BlackBerry is bringing its BBM on Android and iOS devices. We have learned that some of the BBM services will remain exclusive to BlackBerry Phones, and the very basic messaging services will be offered to everyone.

The BlackBerry Messenger for iOS and Android will allow users to get in touch with their old-generation phone carrying users and as well as a big threat to WhatsApple like services that are already dominating the cross-platform messaging industry.

BBM for iOS is currently rolling out in iOS App Store, and currently available to New Zealand users. It will be available soon in the U.S App Store for everyone.