While taking Tim Cook on stage at D11 Conference, AllThingsD becomes rock-star of internet in revealing several stories about upcoming announcements at Apple. Tough Cook didn’t shared any exact information about the upcoming products, but he left out media with enough hints to make their business grow in the upcoming months with iPhone and iPad related rumors. In addition to all recent rumors about Apple services, Apple is now rumored to be bringing a new ad exchange service to its devices for developers. 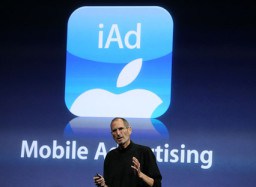 A new report has claimed that Apple is bringing a new feature for iAds platform users that allow developers to play deeply on iOS, Macbook, and other web-properties. Tim Cook didn’t reveal anything on mobile advertisement, but a report from Business Insider claims that Apple is looking launch a new mobile advertising exchange system similar to Facebook and Twitter. The new ad exchange system will allow advertisers to go more accurate with their bids and customers on iOS and Mac OS platform. The report comes from an Apple executive, who is playing an important role in mobile advertising:

We heard it from an executive who is one of the biggest players in online advertising… an ad exchange would work by allowing advertisers to target users as they enter the Apple eco-system on their iPads, MacBooks, various web sites and apps. The system would alert advertisers that an Apple user arrived. Any advertiser tracking that user with a cookie (a piece of software that records previous web sites you’ve looked at) could then bid to serve an ad targeting that user.

Since Apple is moving towards its 2013 Worldwide Developer Conference, there are chances that we will see more updates like this. WWDC 2013 has already gained its fame in the internet world, and soon will blow up everyone’s expectation with public / developer presentation of iOS 7 and latest OS X.

It is interesting to mention here that during D11 conference, Tim Cook completely takes out Apple from advertising platform, and says that Apple only digs in iAds if it is beneficial for their developers. There are many thing in Apple road-map that are yet to make their way to internet. So keep in touch with us for more latest updates about WWDC 2013.