One of the things that people from all around the world should really appreciate about Apple is the fact that the Cupertino based company has a great software creation team that releases constant updates on all of their devices, regardless of their region at once, unlike Android which takes months or even years to come with an update and then not even make it available for all of the Android models whilst making it dependent on where a user is situated.

With this factor in mind, you may be happy to know that Apple has just seeded a new beta build of the popular iOS 8.2 software to developers, therefore making it the fifth build of the initial iOS 8. Anyone with a registered developer account with Apple now has the possibility to download the new software over-the-year, or through the Developer Center application as well. 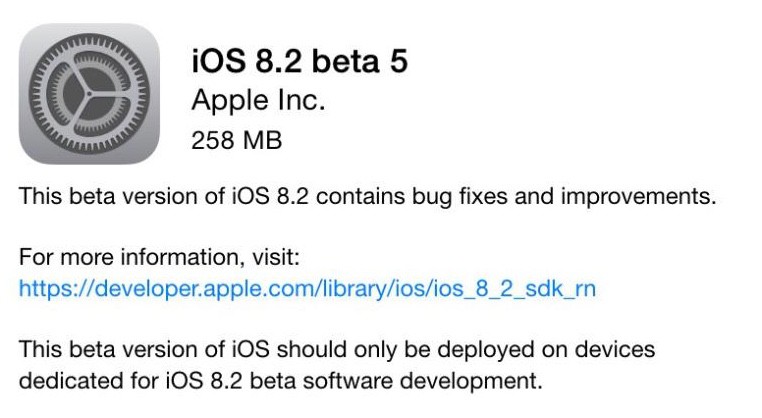 According to the most recent reports, the new beta has a couple of bug fixes and improvements. One of the bugs present in the previous version of iOS 8 would be the fact that certain popular apps would lag out, which is definitely not something to be proud of. Together with fixing these bugs and bringing in a couple of different improvements, the new build also comes along with a new version of xCode 6.2 Beta 5 that comes with WatchKit, which is a software meant to allow developers from all around the world to begin creating a wide variety of apps for the upcoming Apple Watch that will most probably be released to the public over in April.

However, one thing that is a bit surprising refers to the fact that Apple is expecting app developers to create apps for the Apple Watch in absence of the actual device, which can be quite annoying. The company also did not comment on when the newest version of iOS will be released to the public, but chances are that it will in in a couple of weeks from now, which shouldn’t make it a problem. For more iOS news and even jailbreak tweaks, you can go ahead and check out Allcydia.