You are here: GeekSays Technology News » Apple » Apple introduces new app return policy in the US

An interesting thing about the European Union refers the fact that people who purchase just about any kind of product are entitled by law to return it within 14 days after its purchase without needing to provide any reason for the return.

Over in the EU, Apple’s 14 day return policy was quite interesting, mostly due to the fact that users were known to abuse the system, although they were not really abusing it when things are looked at from an objective point of view. However, an example of this type of abuse may be an user who downloaded dozens of apps with the purpose of trying them out and seeing whether they work well and then requesting refunds for every single one, once he got bored of using those apps, basically getting access for a 14 day period to all apps which are available on the App Store, regardless of their price. 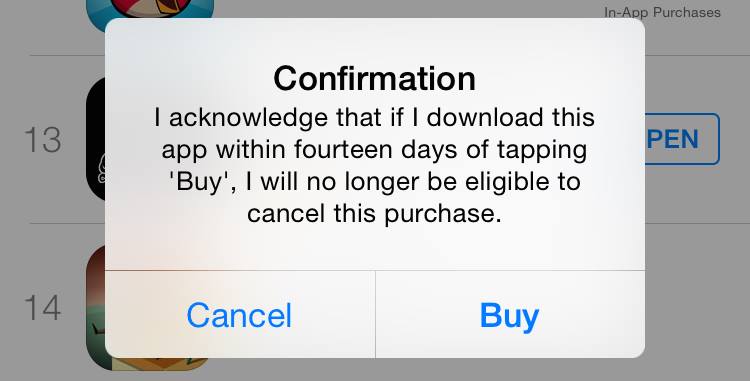 Apple was quick when it came down to catching up with the scheme and they now went and changed up the system a bit in order to ensure that things like what has been mentioned before will not really be repeated by users in the future. The method that Apple decided to take on means sending all users who buy a large amount of apps in order to try them out and then request a refund a notification for each app which has been purchased with the following message:

“I acknowledge that if I download this app within fourteen days of tapping ‘Buy”, I will no longer be eligible to cancel this purchase.”

This means that Apple may actually be bending the 14 day return law in the EU, but at the same time finding a good way to ensure that users do not abuse of the system, which has sparked quite a lot of controversy on the Internet in the last couple of days.

With everything that has been outlined so far, what do you think about the 14 day return law over in the EU? Do you think that Apple’s idea to limit purchases for those who abuse it is ethical or not? Let us know your thoughts in the comment section below.