There is no doubt that vast majority of devices are already running iOS 7, no matter if it is older or newer. Everyone is firing up an iOS 7 update on his or her iOS devices, and Apple has confirmed this morning that 74% of its iOS devices are currently running iOS 7 in less than 3 months of final release of iOS 7 to public.

A large number of analytics making round this week from advertisement companies showing iOS 7 is out ruling every older iOS firmware version on iOS devices. We have reported in the past that new interface has gained too much attention from all over the world, and every other person wants to taste the new layout on his or her iPhone or iPad devices. 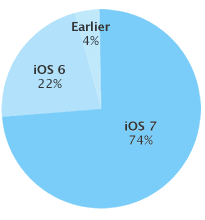 On the other hand, we have noticed that iOS 6 is still holding up 22% of iOS devices, and 4% devices are running firmware versions that are older than iOS 6. The data is collected from App Store with help of Chitika, and suggests that Apple is working seriously on OS fragmentation. The other hand, Google is struggling with rolling out of KitKat to all Android based devices. Hardly 1.1 percent android devices are now running Kitkat 4.4 update and Google has already launched the Android 4.4.1 update for all devices.

Google analytics are gathered from Play Store usage, and it doesn’t include millions of devices that come from cheap Chinese retailers. Google only count those devices that are running Google services and applications.