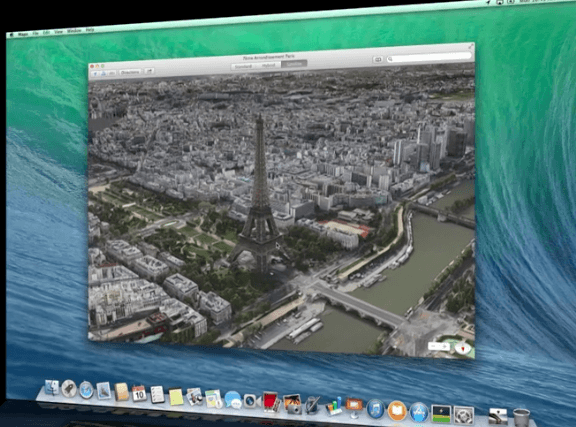 Apple Maps on OS X Mavericks works exactly as it works on iOS. It comes with deeper social integration, and an option for OS X users to send their current location to other users. Apple has also introduced Apple Maps SDK to developers that will allow them to implement Apple Maps in their applications. The maps services bring the iOSexclusive flyover feature to OS X devices with the OS X Mavericks launch. The Maps SDK allows developers to perform certain tasks with Apple Maps in their applications.

Apple has already previewed the demo of Maps integration on OS X application by implementing it in Calendar and Notes application on OS X 10.9.  Apple Maps will be rolled out to the public later this year with final release of OS X 10.9 Mavericks to public.

Furthermore, the desktop version of Apple Maps comes with iCloud synchronization that allow users to easily bring their bookmarked place from one device to another device in a minute without losing the mark on the map. The iCloud sync in Apple Maps is the most interesting feature that will attract people towards it.

With OS X Mavericks, desktop users will able to send their directions to iPhone and iPad users using push notifications. We are trying to get our hands on OS X 10.9 beta preview to reveal more information about the service.