You are here: GeekSays Technology News » Apple » Apple acquired half of U.S mobile activation in Q4, demand still at high

According to a survey report of consumer Intelligence Research Partners (CIRP), one in every two mobile phones activation in US from October 1 to December 31 was iPhone that is 50% of the Smartphone users have activated their phone with iPhone whereas Samsung has won the second place by 26% and south Korean firm LG is in the third place with 11%. This report was brought by surveying 500 consumers in US.

Apple’s share was only 28% at the prior quarter (Q3) when they booked. CIRP said that this increased percentage is made by the consumers who were waiting for the iPhone 6 to be released.   Samsung’s percentage was dropped by 5% but LG has managed to increase the percentage by 8% from the previous quarter. 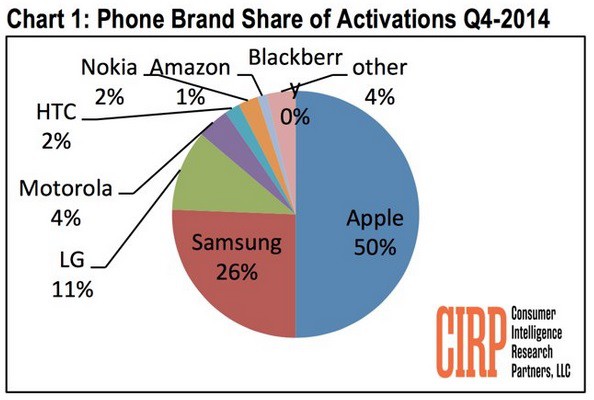 Josh Lowitz the co-founder of CIRP said that 2014 was a great year to Apple, from every side as they saw a great achievement. 25% of the Samsung customers and 18% of the LG consumers have activated their phone by switching into an iPhone.

Addition to this, this number of Apple is likely to be increased more as 56 percent of the consumers who have a plan to buy a Smartphone in the next 90 days are determined to have an iPhone. This conclusion is made by the market Research firm 451 Reseach which is based on the response by 4126 North Americans respondent.

Though this percentage came down from 71 percent but still they have been able to manage to be in the first position of demand level as the percentage of consumer planning to have a Samsung phone is 18%. Samsung has increased the rate 5%.

The increasing display size helped Apple to achieve their aim as 60% consumer said that they prefer big display screen which is more than 5 inches.