To be frank, there is practically no equal to Microsoft Word as a text writing and editing app. After it was released a couple of years back, this app became one of the most used on computers from all around the world and it is also available on mobile phones and tablets nowadays. With this factor in mind, thanks to the great features that it currently offers, Microsoft Word gets the App of the Week award. 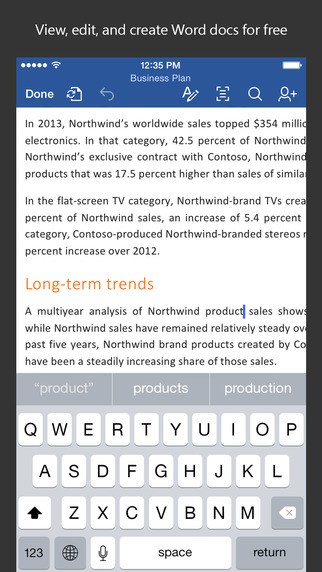 Leaving other competitors aside, documents simply look splendid when opened with the help of Microsoft Word. All aspects of a document, including images, tables, equations, charts etc. are fully formatted, thus ensuring that users from all around the world have a wonderful experience. Additionally, the app can also be used to create and edit documents on your mobile, as it has most of the features which are present in the desktop version of Microsoft Word.

What’s even better is that whenever an edit is made, content formatting is kept and transmitted to all devices in the same format, thus making sure that no more edits have to be made after a document has been transferred from one platform to another.

All of the factors which have been highlighted above together with the simple fact that the app has a friendly user interface, definitely play a great role when it comes down to making Microsoft Word one of the most popular, but also one of the greatest text editing apps of all times, on all types of devices.

Have you tried it out on your phone yet? If yes, did you find it as easy to use as it is promised? Let us know!