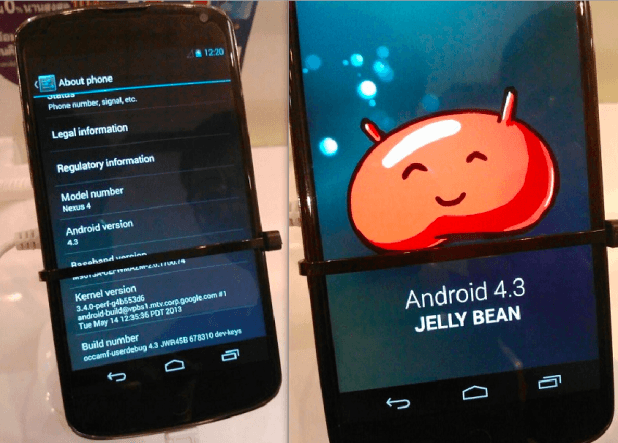 A member on XDA-Developers posted numbers of photos of his Nexus 4 running on Android 4.3, and revealing that Android 4.3 is just a minor update to Android 4.2. The user reported that Android 4.3 leaked build is a beta testing Android 4.3 build, and it may misses’ numbers of features that may come in the official launch. In addition to it, Google is also looking forward to mainstream its simple Android Vanilla OS on recently launched Android devices. Following Samsung Galaxy S4, the HTC One is also reportedly coming up with stock Android OS, and will enrich the users experience with Nexus phone environment.

One major change which we have noticed is that Google is bringing the Android 4.3 purely under Jelly Bean title by not offering any major update to core system of operating system. Leaked Android 4.2.2 update also brings Samsung Galaxy S4 features to Samsung Galaxy S3 last week.