You are here: GeekSays Technology News » Apple » An exclusive look at the Apple Lucky Bags

Not long ago, we covered the idea of Apple hosting more and more events at their stores throughout the world. For a couple of years, the Cupertino based company has been famous for its annual Lucky Bag promotion event over in Japan which was hosted this Thursday. 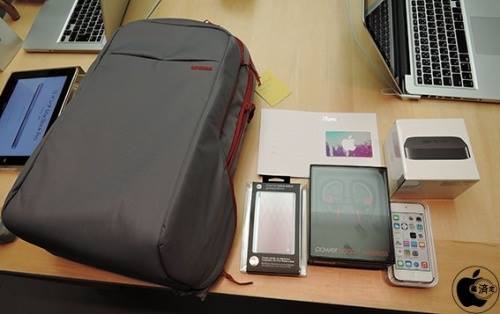 The main idea of the event is that in exchange for around $300, Apple will give out a bag full of goodies, sold for quite a good discount. The catch is that users have no idea what’s I the bag until they buy it, so this makes it quite an interesting experience for Japanese customers. Another awesome fact that is worth pointing out is that a couple of the bags also contain some big items, such as Macbooks, iPads, speakers, gift cards and more, all of which encourage more and more people to buy these Lucky Bags.

This year, all of the bags had a pair of wireless headphones, an Apple TV, a Mophie Powerstation Battery Juice Pack and an ICON slim Backpack which are awesome items that definitely overcome the price tag of $300, thus allowing customers to gain quite a substantial discount.

However, customers cannot go ahead and purchase as many bags as they would like, mostly because of the limitations that Apple imposed. This means that that customers can only get one Lucky Bag and only if they are located in Japan. Users can also not return the bags, unless they came with a defective item.

Like in every year, the Lucky Bags event caused large line-ups at the participating Apple Stores throughout the country, as people were lining up the night before in order to ensure that they’ll be able to get their hands on one of these awesome bags filled with goodies.

Based on what has been mentioned so far, do you think that it would be wise if Apple started holding more of these events in their stores from all over the world? Lt us know your thoughts in the comment section below.