The next major update to iPhone lineup is dubbed as iPhone 6 for the moment. The new iPhone 6 rumored to carry a larger screen finally to compete with market options. We heard from a notorious source, DigiTimes that Apple is working on larger screen size iPhone models. Two models are rumored to come out this year to compete with other smartphones in the market. One model to feature 4.7 inch screen size, while the second-one to feature 5.7-inch screen size. 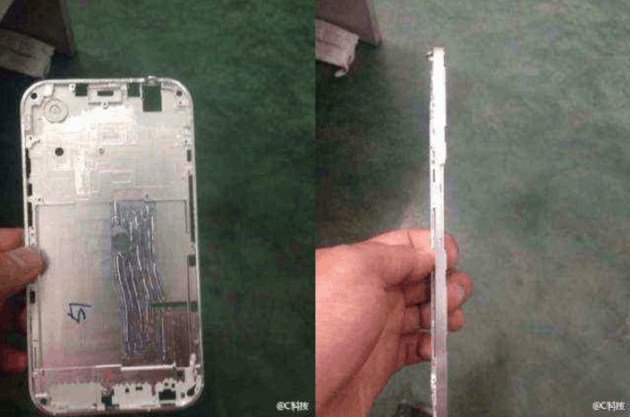 Over the years, Chinese social network played an important role in leaking new parts of the upcoming iPhone model to mainstream media. We have noticed an earlier chatter on Chinese social network about the leaked iPhone 6 thinner plate, and now here we are with alleged iPhone 6 frame. The iPhone 6 frame is somehow leaked on social network, and sources are betting on its authenticity. It is merit mentioning here that earlier designs leaks are the one, which never sees the sunlight. The report comes from a prominent source of C Tech blog; the same source published accurate photos of iPhone 5s hardware right before the launch of a product.

We are forced to believe in the leaks, as the source has a solid reputation in revealing new hardware of iPhone lineup. As you can see in the images above fold, the inner frame of iPhone 6 is a bit thinner than standard iPhone 5s. The frame is also highlighting the rounded shape of iPhone 6 frame, but we are still raising our voice that it may be an internal prototype from Apple.