If you’re the owner of a Nokia Lumia phone, using Windows Phone 8.1, we have some great news for you! Today, Microsoft announced on their official Twitter account that all their Lumia devices using this operating system will be updated to Windows 10 next year! 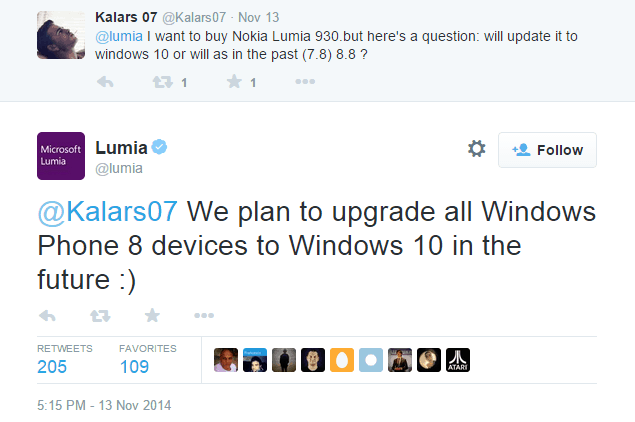 Windows 10, coming soon to a phone near you!

As stated by Pocket Lint, the Lumia account stopped using the term “phone” from the Windows 10 update description, confirming that Microsoft is looking forward to using just one platform for the whole product family. The company’s CEO, Satya Nadella, also declared that the next version of the operating system  will basically combine three operating systems – for PCs, smartphones and tablets – into “one single converged operating system for screens of all sizes”.

Even three-years old phone will receive the update

Of course, we don’t expect to see all Lumia phones receiving Windows 10 at the same moment. Also, we don’t exclude the possibility for older devices to receive it only in the second quarter of 2015 or even later, but it will happen. After all, it’s way better than the time when they ditched all the WP7 phones when switching to WP8.

Any first thoughts on this? Are you a Lumia user looking forward to seeing the update on your phone?