When nobody was expecting the Canadian manufacturer released today a whole new smartphone, during their press conference at MWC 2015. It’s true, it’s just a mid-ranger, but that doesn’t mean we will ignore the BlackBerry Leap.

A pause from physical keyboards

Despite not being a top-notch smartphone, like other models launched recently – we’re looking at the Galaxy S6 and One M9 – but a touchscreen handset is a nice addition to BB’s line-up, as lately, they focused only on QWERTY-keyboard models. 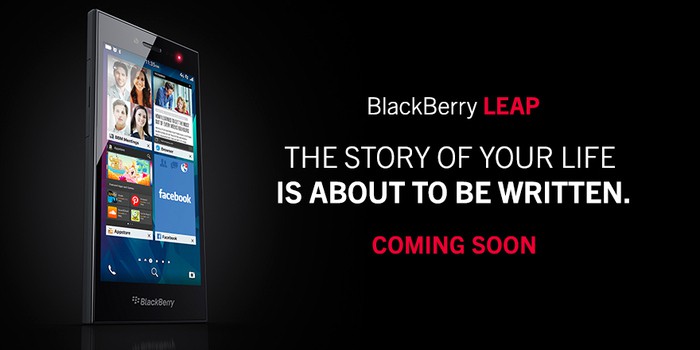 BlackBerry leap comes with a relatively big display, measuring 5″ inches and featuring a 72op resolution, resulting a density of 294ppi. Ok, 1080p would’ve been better, but let’s not forget that it’s a mid-range model.

Under the hood, we can find a Snapdragon S4 Plus chipset, with a dual-core Krait CPU, clocked at 1.5 GHz, alongside 2 GB of RAM. Uhm, guys, we don’t know if you’re aware of this, but this is a pretty old chip. Almost everybody is using Snapdragons nowadays. It also comes with 16 GB of internal storage, expandable with 128 more, using the microSD card slot.

On the back, there’s an 8 MP snapper, with autofocus and LED, able to shoot 1080p videos. Also, there’s a front-facing one too, but just with a 2 MP sensor, which you can use for some selfies or recording 720p videos.

One of the most interesting features of the BlackBerry Leap is the battery. The non-removable power pack, with a capacity of 2800 mAh, can last up to 25 hours of heavy use, according to the manufacturer’s website. Finally, some good news!

As for the operating system, it’s using BlackBerry OS 10.3.1, focused on security. But a video can explain way better how it works:

So, any first thoughts? Would you pay $275 for a BlackBerry Leap, when it launched, in April?