You are here: GeekSays Technology News » Android » A new dessert in the making – Android 5.0 news and rumors

Is the next version of the mobile operating system closer than we thought?  Well, according to a recent hint, coming directly from Google, it won’t be long until Android 5.0 will start rolling out.

Ok, but you may ask yourself how are we so sure that it’s going to be 5.0 and not 4.5. Don’t worry, we have an answer. Ever since Android 2.3, the search engine giant teased us with a couple of screenshots, containing a subtle hint about the number. To be more specific, the screenshots were displaying the time, which was exactly the version number. Right now, if you check the time of the devices presented in Google Play, you’ll see that all of them are showing 4:40. Well, what do you know? The latest Android version is 4.4 KitKat…

A few days ago, while promoting a new Google Now feature, able to show the scores from World Cup matches, Google used the same teasing method. See for yourselves: 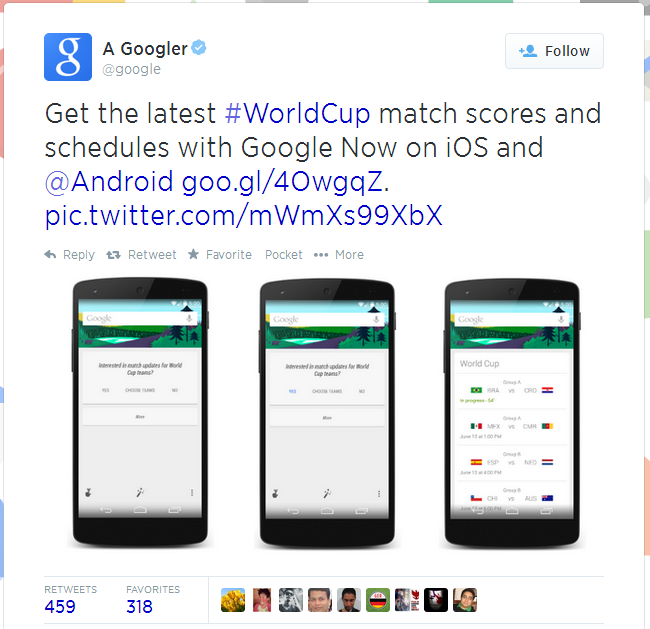 Take a closer look at the time shown in this picture from the tweet. Oh, is that a clock showing 5:00? You bet. Considering this and Google’s previous history, it’s almost a certainty that the next Android version is going to be 5.0.

But what about the name?

Next in line is a dessert, starting with “L”. There are a few possibilities, like Licorice, Lemon Pie, Lollipop or other sweets we can’t remember right now. Still, our money go on “Lollipop”, as it’s a way more common word than the others. Not to mention that there are a few sources also pointing to this name.

For the moment, this is everything we know about the next Android version. We’re eagerly waiting for Google I/O 2014 to start and see if Mr. Sundar Pichai, the head of Android, will give us more details about their new dessert.

Google, we’re expecting a lot from 5.0, so please don’t disappoint us!