During WWDC 2013 Keynote, Apple surprisingly comes up with a word “Mac Pro” to tease developers / designers and professionals out there. Apple has apparently ignored Mac Pro update from the last couple of years, and only introduced specification bumps which cause trouble for everyone in the market. However, at the WWDC 2013, Apple has revealed the all-new Mac Pro 2013 to developers. Apple has previewed the US built Mac Pro 2013 for everyone. 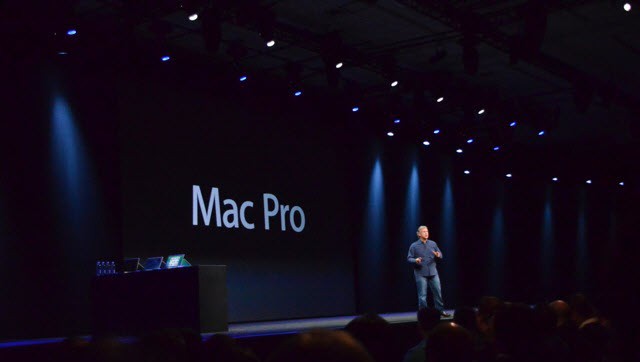 2013 Mac Pro comes with a complete new design, and the machine now features the Intel Xeon chips to power up professional works. The latest 2013 Mac Pro carries a design profile of cylinder shape which is 1/8 the volume of previous unchanged Mac Pro model. Many people around the world has waited for too long to get their hands on it, and according to a press release from Apple. The latest Mac Pro will be available from today in Apple Stores.

It is interesting to mention here that the new Mac Pro is completely built in the USA, and it also features dual workstation GPU’s for professional outputs from metal machines.

With the latest Xeon processors, dual FirePro GPUs, ECC memory, PCIe-based flash and Thunderbolt 2, all built around a revolutionary thermal core, the next generation Mac Pro is the most radical Mac yet,” said Philip Schiller, Apple’s senior vice president of Worldwide Marketing. “All this performance and expandability is packed into a dramatic new design that’s one-eighth the volume, and best of all, it will be assembled here in the USA.